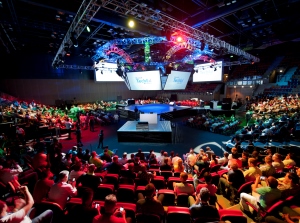 The global meetings industry is a significant and growing element of business tourism in the world as it generates billions of rands in revenue and sustains millions of jobs annually.

Durban International Convention Centre Chief Executive Officer Lindiwe Rakharebe said the industry is important to South Africa’s economy, not just as a very high-value segment of the global tourism industry, but also as a much more wide-ranging contributor towards economic development, job creation and societal advancement.

“Today the Durban ICC joins the rest of the world to commemorate Global Meetings Industry Day, which is a day set aside to highlight the real impact meetings have on people, businesses and the economy,” she said.

The Durban ICC was the first purpose-built international convention centre in South Africa and has served as a catalyst for economic development in the City for the past 21 years by attracting a number of premier and world-class international events to our shores.

“The Durban ICC contributes massively to the economy of the City of Durban, the province of KwaZulu-Natal and ultimately South Africa as a whole. We are proud of the fact that the Centre has contributed over R40 billion to the country’s Gross Domestic Product and 100 000 jobs were created as a result of the Durban ICC’s activities since its opening in 1997,” said Rakharebe.

The Meetings, Incentives, Conventions and Exhibitions (MICE) industry is one of the key drivers of tourism destination development and therefore an important generator of income, employment and foreign investment.

“The Durban ICC has hosted some of the biggest international conferences on the African continent which demonstrate that the Centre is more than simply a venue. It is a platform for meetings, a facilitator of dialogue and a place for people to connect, debate and ultimately find common ground,” Rakharebe added.