Durban ICC donates R21 000 for a worthy cause 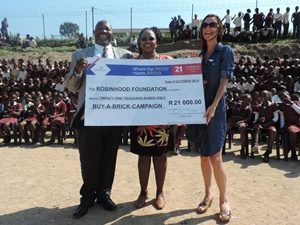 To ensure that learners from Lalelani Primary School in Ntshongweni have access to clean water, the Durban International Convention Centre (Durban ICC) donated R21 000 to the Robin Hood Foundation which will be put towards the school’s rainwater harvesting system.

Lindiwe Rakharebe, Chief Executive Officer of Durban ICC, visited the school today, 9 October 2018, where she handed over the cheque to the school Principal Mthokozisi Mathe and Co-ordinator of the Robin Hood Foundation Kim Griffith Jones.

“Water is life and having access to clean drinking water is very important. But it is also imperative that we preserve water; as it is a very scarce resource. The Durban ICC is committed to community upliftment and ensuring that youth, who are the future leaders of our country, are empowered and have access to services,” she said.

This year the Durban ICC, which was officially opened by the late former President of South Africa Nelson Mandela in 1997, is celebrating 21 years of changing lives. The visit to the school forms part of the centre’s concerted effort to support and give back to local communities.
Rakharebe said Mandela loved children and also encouraged young people to focus on education.

“Tata Mandela once said, ‘Education is the most powerful weapon which you can use to change the world.’ I also share these sentiments and urge you to focus on your education, especially during this period as you are busy preparing for the end of the year examinations. Work hard and respect your elders,” she told learners at the school, who were beaming with excitement.

Mathe thanked Durban ICC and the Robin Hood Foundation for the donation saying the rainwater harvesting system will ensure that the school, which has 677 learners, always has water supply.

Griffith Jones said: “We are so grateful for the support of Durban ICC, what a wonderful way to commemorate their 21st birthday by giving back to the community getting involved to help with our Buy-a-Brick upliftment campaign at Lalelani Primary School, in particular the rainwater harvesting and pumps for the Jojo tanks to ensure that the school no longer faces trials due to water shortages in this limited services community. Thank you Durban ICC, we look forward to partnering with you again in the future.”