High Achiever with a Heart of Gold 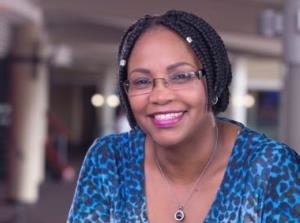 “When you empower a woman, you empower a community”. So says Lindiwe Rakharebe who is at the helm of Africa’s leading convention centre, the Durban International Convention Centre (Durban ICC).
The staunch advocate of gender-equality and women empowerment has made a personal and professional pledge to making a difference in the lives of those less fortunate.

Rakharebe took over the reins of the Durban ICC as Chief Executive Officer in April 2015 and has since contributed significantly to the success of the entity which produced three impressive sets of financial results and received three clean, unqualified audit opinions from the Auditor General.

The Durban ICC also won several awards under her leadership including the World Travel Awards as “Africa’s Leading Meetings and Conference Centre” and was rated among the world’s top 17 client-rated convention centres.
Rakharebe is a self-confessed perpetual learner who places high value on education and imparting knowledge in order to uplift the lives of others. She cites patience as her greatest strength.

“As women we have a natural ability to nurture and touch people – qualities gifted to us by God and very much part of our biological make-up.
“We are born with different skills-sets and have been put on earth to serve a higher purpose in life. The extent to which your unique skills are used to uplift others is important,” she said.
Rakharebe holds a Bachelor’s Degree in Management Leadership from the University of the Free State as well as other qualifications in marketing management and management development.

So passionate is she about women empowerment issues that she serves on the Board of the KwaZulu-Natal Network on Preventing Violence against Women. She also dedicates much of her time to serving several committees which benefit and raise awareness for the plight of mentally-challenged youth in the country.
The mother of four and grandmother of two aspires to the mantra: “Treat others the way you would like to be treated.” She says nothing supersedes the value of being a mother and the importance of belonging to a family.

“As a champion of equality, I have a vision for a world in which all human beings are comfortable with cultural diversity and where uncompromising respect exists for one another. It all starts with teachings at home.”
On her views on Women’s Month, she said there needed to be “less talking” and “more doing”.
“Companies must put in place strategies and action plans to advance women that are measurable and sustainable.

Only when people are held accountable to these plans will impact be truly felt,” she said.
She said in the quest for success, it was important to respect yourself and have your feet firmly on the ground. “Humility is an important quality. Believe in yourself and love what you do. Be open to learning and make the best of opportunities that are available.”
Rakharebe’s leadership style is characterised by love, respect and open communication, and she places a premium on the importance of work-life balance.

She has served in a management capacity for all four of South Africa’s major banking institutions. Over her 30 years in the corporate environment, she has repeatedly proven her ability in strategic management and leading high performance teams.

During the past financial year, the Durban ICC once again made an immense macroeconomic contribution to Durban, KwaZulu-Natal and South Africa. A staggering R4.7-billion was added to South Africa’s GDP and no less than 9 000 jobs were created and sustained as a result of the Centre’s activities this year.

Rakharebe has a keen interest in cooking and experimenting with various cuisine, including desserts. She takes solace in reading and treats herself to massages which help to rejuvenate her. She is also a connoisseur of tea, using the opportunity to travel as a means to explore and enjoy different blends.

The Durban ICC will celebrate its 21st anniversary at an exclusive gala dinner event on Saturday 27 October.
Under the theme 21 Years of Changing Lives, the high profile invitation-only event, will be attended by valued stakeholders and partners of the Durban ICC, including eThekwini Municipality; Durban Tourism; Tourism KwaZulu-Natal; Durban KwaZulu-Natal Convention Bureau; Trade and Investment KwaZulu-Natal; South African Tourism; South African National Convention Bureau and Brand South Africa.
Coincidentally, the year 2018 also marks 100 years since the birth of anti-apartheid stalwart, Nelson Mandela, who officially opened the Durban ICC in 1997.
The Durban ICC, has been instrumental in helping to drive positive change in society and empowering ordinary South Africans in line with its core mandate to be a catalyst for positive economic impact and job creation.