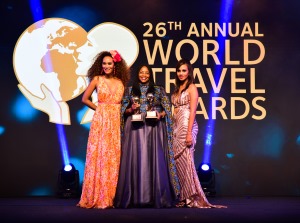 The beautiful City of Durban has once again proven to be the ‘must visit’ destination of choice on the African continent after scooping two coveted awards at the World Travel Awards held in Mauritius on 1 June 2019.

The City of Durban captures the best of the whole of Africa, boasting beautiful beaches, warm oceans even during winter, friendly people, a melting pot of cultures, top eateries and wonderful weather all year around.

Receiving the awards on behalf of the City, Durban International Convention Centre Chief Executive Officer Lindiwe Rakharebe expressed her sincere appreciation to all the visitors and delegates who voted for Durban.

“These awards recognise Durban’s proud history of hosting some of the world’s largest and most prestigious meetings and conferences such as the International AIDS Conference, the World Economic Forum on Africa and the United Nations Climate Change Conference COP17, to mention a few. This brings to seven the number of World Travel Awards which the city of Durban has been honoured with and we will strive to live up to our excellent reputation and look forward to hosting even more international events to our shores in the future,” said Rakharebe.

Rakharebe added that these prestigious awards have once again cemented Durban’s position as the world’s mega events and tourism destination of choice.

“Durban as an events destination has modern and world class infrastructure as well as an amazing oasis of entertainment offerings. Holding an event in Durban also offers delegates excellent value-for-money because of our outstanding restaurants and accommodation establishments. The Durban ICC is committed to facilitating the creation of economic opportunities through the world-class events it hosts. Job creation, skills development, environmental sustainability and inclusive economic growth are all areas in which the company has contributed meaningfully in the past year,” added Rakharebe.

EThekwini Mayor Zandile Gumede commended team eThekwini and the collective leadership of the City for putting Durban on the world map, yet again.

“This is a clear demonstration that we are a City that is hard at work. Our hospitality and our ability to meet the needs of delegates in general, is again paying dividends. To us, this achievement sends a clear message that we must not rest on our laurels. We need to double our efforts to ensure that our City is permanently a force to be reckoned with in travel and tourism,” said Mayor Gumede.