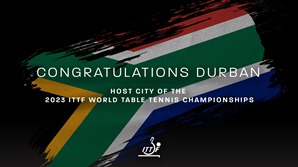 The Durban ICC has their eye on the ball, as they begin preparations to host the ITTF World Table Tennis Championships, in 2023. This is a major milestone for the sport of table tennis, as this event will be a first for South Africa and has not been held in Africa since it took place in Cairo in 1939.

There was great excitement as the official announcement was made at the International Table Tennis Federation’s (ITTF) virtual Annual General Meeting on the 28 September 2020. This good news came after the final presentations were live-streamed to 226 ITTF member countries on 21 September 2020. Rakharebe celebrates the winning of the bid as a victory for the destination. Rakharebe added that “Sports events, as we know, significantly uplift the community and Durban ICC looks forward to focusing on community and economic upliftment, as we move forward after a difficult 2020.”

Durban ICC Chief Executive Officer Ms Lindiwe Rakharebe said, “It is a great honour that the Durban ICC has been chosen to host the first event in Africa in 81 years and we look forward to welcoming both local and international delegates, in true Durban style”. Durban aced the votes by 90 to 39, against Dusseldorf, Germany, who has previously hosted this prestigious event, on multiple occasions.

Commenting on the announcement, International Table Tennis Federation (ITTF) Deputy President Khalil Al-Mohannadi said “Congratulations to both South Africa and Germany on presenting very strong bids to host the 2023 ITTF World Table Tennis Championships Finals. We are continuing to see benefits from the forthcoming changes to the format of the World Championships Finals, which will be introduced from next year onwards, leading to more countries bidding from different regions of the world. This also reflects the ever-increasing international appeal of table tennis, which is extremely pleasing to see as we continue to work hard to make the sport more global in the future.”

Commenting on the winning of the bid, Joe Carrim, President of the South African Table Tennis Board said, “I am obviously ecstatic and beside myself with joy. The sleepless nights and all the hard work have paid off. I want to say to Germany that their presentation was absolutely superb. I did not want to take our success at all for granted, given all their experience, and I am certain that they will come up again (to host the World Table Tennis Championships Finals) in future. I want to thank the world of table tennis and the ITTF for entrusting us with the confidence with the team that we have, the city that we have, and the support from the government that we have to host this event. We are certain that we will make everyone who supported us extremely proud of having placed their trust in us to take the baton forward and host a World Championships worthy of the trust that you have given us.”

The Durban ICC expressed their sincere gratitude, to all the key role players, involved in the bid process and acknowledged the great team effort made by the City and Government to secure this event for KwaZulu-Natal. “We also wish to congratulate Mr Joe Carrim, President of the South African Table Tennis Board and his entire team for their passion and commitment throughout the bidding process. The team at the Durban ICC looks forward to working with all parties to ensure the delivery of a highly successful, world class event”, concluded Rakharebe.