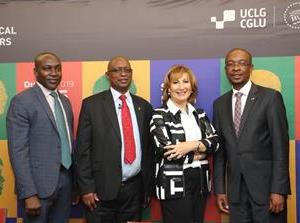 The Durban International Convention Centre (Durban ICC) is a hive of activity with three high-profile international conferences running concurrently at the Centre until 15 November 2019.

These conferences will be attended by 3000 international delegates including Mayors from various cities around the world.

The largest of the three conferences is the United Cities and Local Governments Congress (UCLG) which is jointly hosted by the South African Local Government Association (SALGA) and eThekwini Municipality from 11-15 November 2019.

This conference will be attended by 3000 delegates including South Africa’s Cabinet Ministers, Mayors, Premiers, CEOs of State Enterprises, Members of Parliament and public sector managers.

Launched in May 2004, the United Cities and Local Governments is the global advocate and representative of democratic local government with a membership of 136 countries across the world. It is the largest gathering of Mayors, Presidents of Associations, Councillors, and Local and Regional practitioners from around the world.

The African Forum for Urban Safety (AFUS) running from 10-12 November 2019 is one of the key United Nations Habitat programmes that is looking at sharing best practices to support and capacitate cities to promote safety in our cities. This gathering brings together 300 leaders from the African continent to discuss issues of urban safety with a special focus on gender-based violence and safety of women in cities.

While the Global Parliament of Mayors (GPM) which ended yesterday, 11 November 2019, was attended by 300 Mayors from cities around the world. The GPM champions the role that mayors play in addressing key global challenges at local level. Among the issues which were discussed during the three-day conference include urban migration, urban security and good governance.

EThekwini Mayor Mxolisi Kaunda said all plans were in place to ensure the safety of delegates attending these conferences.

“A meeting was convened with all heads of law enforcement agencies in the province including the South African Police Service, Metro Police and Emergency Services to finalise our plans to secure the conferences. The plan entails high police deployment in and around the conference venue. These deployments will range from foot patrols, motorised patrols and static deployments in identified crime hot spots. We also intend to utilise our CCTV cameras to enhance policing throughout the City. Therefore, as the City we are indeed ready to secure these conferences and the delegates,” said Kaunda.

Furthermore, Kaunda said the City is expected to derive enormous economic benefit from these conferences.

“The direct visitor spend is projected to be approximately R35-million with the contribution to eThekwini’s GDP expected to be in the region of R64-million, with approximately 182 jobs to be created. Hosting these events will give Durban the opportunity to promote the City and build its reputation as a globally competitive City. It will also attract much-needed investment and position eThekwini as a preferred venue for international events. These events will also enable us to obtain new ambassadors and partners to develop our cities and create an environment for Durban to become a caring and liveable City,” added Kaunda.