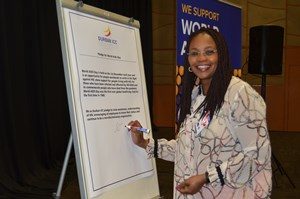 The Durban International Convention Centre (Durban ICC) united to raise awareness of the importance of preventing and treating HIV at a World AIDS Day Commemoration event held at the Centre today.

The programme also was aimed at increasing awareness around the rights of people with disabilities as equal citizens in society.

During an emotionally charged commemorative event, Durban ICC Chief Executive Officer Lindiwe Rakharebe called on the Durban ICC team to support and show solidarity with people living with, and affected by HIV/AIDS. The theme this year for World AIDS Day is “Know Your Status.”

“We know that stigma and discrimination against people living with HIV makes it a challenge for people to test for HIV and for those infected to seek treatment. So let us put an end to marginalisation and discrimination of those infected with HIV by raising social consciousness about the epidemic at the work place and in our communities,” she said.

Social Worker Khanyi Khubheka from Lifeline emphasised on the importance of World AIDS Day commemorated on 1 December annually, saying it was relevant to all South Africans irrespective of their HIV status.

“A person’s choices prevents them from contracting the diseases thus preventing another 270 000 new infections in South Africa in the near future,” she said.

Rakharebe also highlighted the importance of working together to ensure a violence free society as we are also commemorating 16 Days of Activism for No Violence Against Women and Children.

“This is a wonderful campaign that sets aside 16 days each and every year, from 25 November to 10 December, for society to evaluate their treatment of women and children. However, we should protect the rights of women and children throughout the year. Treat your partner in the way you want to be treated,” she said.

Cookie Edwards the Executive Director at KZN Network on Violence Against Women said there needs to be strong prevention strategies in place, such as seminars and workshops, where people can openly speak up against violence.

“Don’t confine violence against women to just 16 days because it is a challenge we face 365 days a year,” she said.

The Durban ICC also commemorated Disability Rights Awareness Month which runs from 3 November to 3 December and aims to increase awareness around the rights of people with disabilities as equal citizens in society.

Rakharebe said the Durban ICC has prioritised the inclusion of people with disability through our employment equity programme and many other projects which are run by the Centre’s Environmental, Social and Governance Committee.

Rakharebe also shared her story of raising a child that is living with a disability.

“I have three boys and one girl and I thank God for blessing me with Slindile, who has a mental disability. I believe God gave me Slindile for a reason, because I was not a patient person until she came into my life and taught me patience,” she said.

Rakharebe often encourages parents who have children with disabilities to raise them as normal people in a society.

Durban ICC’s Lisa Antione shared her inspirational story about the ups and downs of living with a disability.

“I was born at 31 weeks and spent my first month and a half in an incubator fighting to become strong enough to go home. I have Cerebral Palsy from birth, it effects my right side more than my left, and the left is my stronger side out of the two.”

Antoine said she was blessed to have an understanding family who never made her feel different to anyone else.

“Yes I am different but it is like I say to everyone define different – everyone has a different definition of different – just because I walk differently to everyone else doesn’t mean I am not capable of achieving less than anyone else,” she added.