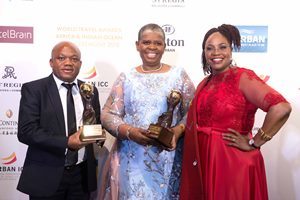 The prestigious Africa and Indian Ocean segment of the World Travel Awards, also known as the “Oscars of the travel industry”, was held at the award winning Durban ICC.

Lindiwe Rakharebe, Chief Executive Officer of Durban ICC, said: “It is a great honour for the Durban ICC to receive this award as ‘Africa’s Leading Meetings and Conference Centre’ for the 17th time. On behalf of the Durban ICC Team, I wish to thank all our clients and stakeholders for your unwavering support and partnership over the years. I also wish to thank my team at the Durban ICC for their hard work, dedication and commitment to service excellence. Durban ICC is open for business and looks forward to hosting many more international events.”

This event was the sixth leg of the WTA Grand Tour 2018 – an annual search for the finest travel and tourism organisations in the world and the World Travel Awards 25th Silver Jubilee anniversary in celebrating and rewarding organisations which continuously push the boundaries of industry excellence.

Global travel and tourism industry leaders are recognised each year at the various World Travel Awards gala ceremonies held across the world, with the Durban ICC hosting the Africa and Indian Ocean nominees, delegates and media. This was the third time that the Durban ICC has hosted the event, the first being in 2008.

KwaZulu-Natal MEC of Economic Development, Tourism and Environmental Affairs Sihle Zikalala said with this prestigious award, KwaZulu-Natal has once again cemented its position as the world’s mega events and tourism destination.

“The current estimates are that, over the next three years, the total direct impact from our Meetings, Incentives, Conventions and Exhibitions will be in the region of R1.1 billion. Tourism KwaZulu-Natal is on an aggressive campaign to increase the number of international tourists.”

MEC Zikalala also said negotiations were under way with other international airlines and that the provincial government was confident that it would in the near future be announcing another airline which would also land directly into the province.
EThekwini Municipality Mayor Zandile Gumede said the accolades received at the awards ceremony bears testament that Durban is a City at work.

“Let me first give credit to our team at the Durban ICC led by CEO Lindiwe Rakharabe. It is quite clear that like in all our entities we also have visionary leadership at the Durban ICC. We are not going to be complacent, we are going to work harder than before to ensure that our City and its facilities such as the Durban ICC continue to be a world choice. We would also like to thank everyone who voted for us,’’ said Mayor Gumede.

“Durban is already well entrenched as one of the busiest ports in Africa from a cargo perspective, but accolades like this show that the work we are doing to develop our cruise tourism and passenger sector has not gone unnoticed globally,” she said.
Opened by the late iconic statesman Dr Nelson Mandela in 1997, the five-star graded centre has been voted “Africa’s leading Meetings and Conference Centre” at the World Travel Awards no fewer than 17 times and continuously strives to deliver excellent service.
Durban ICC also organised a full itinerary throughout the weekend for guests to discover the rich history and culture of Durban and surrounding areas.

“We treated our industry colleagues, friends and media from around the world to a tour of some of the most historical sites in Durban such as the township of Inanda which has played a significant role in the history of South Africa. It was here that Mahatma Gandhi started his passive resistance movement. It is also the birthplace of Dr John Langalibalele Dube – the African National Congress’s first president and is where our late iconic statesman Nelson Mandela cast his vote in the country’s first democratic elections in 1994. We hope all our special visitors had a memorable Durban experience,” added Rakharebe.