Durban ICC nominated as a finalist at the National Business Awards: The Oscars of South African Business 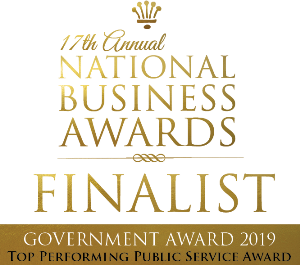 The Durban International Convention Centre (Durban ICC) has been nominated as a finalist for the Top Performing Public Service category at the annual National Business Awards.

The awards also recognise the important social and environmental contributions made by organisations through the excellence of service, commitment to their customers, ethical behaviour and environmental sustainability.

Durban ICC Chief Executive Officer Lindiwe Rakharebe said it was a great honour for the Centre to be nominated for its outstanding business practice, performance and innovation.

“The Durban ICC is a catalyst for economic development in South Africa and continues to broaden the economic impact of the events and tourism sector through contributing to inclusive economic growth while operating in a responsible and profitable manner,” said Rakharebe.

Rakharebe said the Durban ICC continues to attract meetings and conferences that have a long lasting financial impact through ensuring that the event drive economic growth, create jobs and skills development in the country. The events hosted by the Centre has a direct and indirect impact on established businesses and Small, Medium and Micro-sized Enterprises (SMMEs).

“Despite an increasingly competitive marketplace both locally and globally, the Durban ICC has worked tirelessly over the past financial year to grow the economy having contributed R6.3-billion to South Africa’s Gross Domestic Product. From a job creation perspective, a total of 14 064 people were employed as a result of the Durban ICC’s activities in the past financial year,” added Rakharebe.

The winners will be announced and celebrated on 21st November 2019 at Emperors Palace, Ekurhuleni.