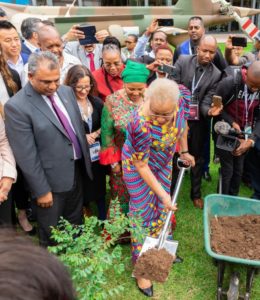 History was made at the Durban International Convention Centre (Durban ICC) today, 14 November 2019, when world leaders joined hands and planted a “Tree of Peace” as part of a campaign to plant 75 million trees globally.

The symbolic planting of a “Tree of Peace” at the Durban ICC, the home of Africa’s first Nobel Peace Prize laureate, Inkosi Albert Luthuli, was part of the “Plant Trees not Bombs” global campaign to promote global peace and highlight the impact of climate change.

The “Tree of Peace” was planted at the Durban ICC adjacent to a highly visible exterior wall where the Sustainable Development Goals (SDGs) were painted, commemorating this event and becoming a resting and reflection place of peace.

The tree was planted by South Africa’s Minister of Defence, Honourable Nosiviwe Mapisa-Nqakula, where she committed the South African National Defence Force to plant one million trees by September 2020.

Minister Mapisa-Nqakula also challenged militaries across the world to join the campaign to achieve the target of planting 75-million trees by September 2020, in time for the 75th anniversary of the founding of the United Nations.

“We have committed to use our weapons of war, to go to war on this new threat of climate change. Today as we lower the tree from one of our military helicopters, we are illustrating to our citizenry and the world the versatility of the military, it can also give life. As we are gathered here, we are reopening a chapter on the role of the military; a chapter that changes the narrative from planting bombs to planting trees, from inflicting pain and death to giving life. I will confer with the Military Command Council and the National Defence Force Chief led by General Shoke and I will urge them to plant one million trees and join other defence forces to do the same,” said Minister Mapisa-Nqakula.

Chairperson of Global Peace, Graça Machel said: “I know that the example which is being set here in South Africa is going to fire-up other many Ministers of Defence and history will have to attest that it started in South Africa, it started in Durban and it became a global movement.”

United Nations Under-Secretary General Fabrizio Hochschild Drummond said: “It’s a great honour to be here and I think this is a wonderful campaign. Planting trees and highlighting this as the alternative to conflict is a very dignified and appropriate way to mark the 75th anniversary of an organization that is struggling today, at least because of its mandate, to uphold peace and security to further social justice and human rights and to promote sustainable development.”

President of the United Cities and Local Governments (UCLG) Parks Tau said cities do not declare war but are the ones that feel the devastation of war.

“As local and regional governments, we need to ensure that hardship does not become violence, we need to develop spaces of resilience that protects our communities and all our of neighbours .Our concept of peace needs to go beyond safety it needs to be about inclusion, integration and tolerance. Planting trees is an answer to the voices that consider war as an acceptable alternative, after all trees are a symbol for developing livable spaces,” he said.

Representing KwaZulu-Natal Premier, Sihle Zikalala, the MEC of Agriculture and Rural Development, Bongi Sithole-Moloi, said: “The launch of the “Plant Trees, not Bombs” global campaign comes at an appropriate time as we accelerate our collective efforts to secure the future generations. Our mission to create a better life for all the peoples of the world hinges on our collective commitment and action to save our planet. Future generations will no doubt judge us harshly if we fail,” she said.

Sithole-Moloi added that the planting of the Tree of Peace was more than a symbolic act. It must be the catalyst for a sustained effort to mitigate the disastrous consequences of climate change. “I take this opportunity to commit our province in playing its part to ensure that the Global Peace target of planting 75 million trees across the world is indeed achieved,” said Sithole-Moloi.

EThekwini Municipality Council Speaker Weziwe Thusi who was representing eThekwini Mayor Mxolisi Kaunda said the City of Durban was honoured to host this ground-breaking event which will see our South African National Defence Force, led by the Minister Nqakula, planting one million trees by October 2020.

“We are pleased to learn that you have also challenged your counterparts across the globe to embark on a similar campaign which will see over 75-million trees being planted to commemorate the 75th anniversary of the United Nations. This initiative is critical as the world is beginning to witness the effects of climate change,” said Thusi.

Durban ICC CEO Lindiwe Rakharebe said: “We are honoured to be planting this “Tree of Peace” at the Inkosi Albert Luthuli International Convention Centre, named in honour of Africa’s first Nobel Peace Prize laureate. The planting of this first tree officially launches the “Plant Trees, Not Bombs” campaign, which will see the planting of 75-million trees around the world in a global effort to fight climate change. We are pleased to partner with the United Nations, Global Peace and the South African National Defence Force on this important worldwide initiative.”