Nelson Mandela Day, celebrated around the world in honour of the late statesman’s birthday on 18 July, provides the opportunity to emulate Mandela’s role as public servant. The event challenges each of us to give 67 minutes – one minute for every year of Mandela’s public service – to help change the world for the better. The Durban ICC commemorated the day by enriching young minds interested in pursuing a career in the Tourism and Hospitality Sector.

Staff at the Durban ICC devoted their sixty-seven minutes to invest in a group of grade 11 and 12 learners from Mcothoyi High School in Umgagaba. The pupils had the opportunity to visit the Durban ICC and spend time with the Centre’s executive team and staff. The event allowed the pupils to gain insight and career advice from specialists in the industry and to help them understand the expectations and rewards of working in the demanding industry. 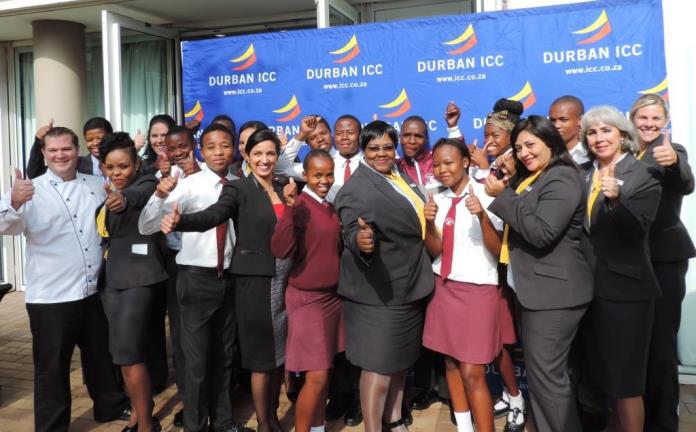 The learners were shown a video featuring Nelson Mandela opening the Durban ICC in 1997 and some of the Centre’s highlights over the years. This was followed by an enlightening talk from ICC’s Marketing, Sales and Events Director, Ms Mala Dorasamy before giving the pupils a tour of the Centre. The learners were then given a taste of working in the industry, by icing and decorating trays of cupcakes which they could enjoy later. Goodie bags were distributed to the students to end this unforgettable experience.

The Centre partnered with Project Enza and numerous other role players in the tourism industry to stage the first annual Mandela Day initiative since the death of the global icon. The project titled, “Knowing and growing our tourism”, was created to grow and sustain the Tourism sector and create a lasting experience to interested youth. Commenting on the day, Dorasamy said, “We have all been so inspired by the great man and this is our chance to do something practical to honour his legacy. The youth always had a special place in his heart and so it is exciting for us to see such potential in the next generation, not only for the tourism industry, but for the country as a whole.”