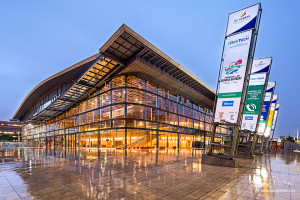 The 2015 fiscal year was a successful one in many respects for the Durban International Convention Centre (Durban ICC). The company achieved a strong set of financial results and continued to deliver significant economic and social benefits to the city of Durban and the KwaZulu-Natal province.

Speaking at the release of the Centre’s Annual Report, Chief Executive Officer, Lindiwe Rakharebe noted, “In spite of the challenging economic climate which has shown nominal improvement at best over the past year, the Durban ICC has managed to post profitable financial results for the fifth consecutive year.”

The company generated a revenue figure of R157-million, showing a year-on-year growth of over R5.3-million and a 20% growth in number of events hosted this year. The Centre showed a marked improvement in its Net Profit for the year, increasing by 32% from R24-million in 2014 to R32-million in 2015.

“The company maintained an impressive Gross Profit percentage (78%) by cutting its cost of sales figure by 6% this year. In addition, the company also showed significant year-on-year growth (34%) in its pre-tax profits moving from R29-million in 2014 to R39-million this year.” said Melanie Rambally, Durban ICC Financial Director.

“Equally notable is that the Durban ICC has been given a clean, unqualified audit by the Auditor General, for the second consecutive year. Transparency, good governance and statutory compliance are foundational to the company’s success and this achievement is a clear demonstration of the company’s commitment to these principles. This audit opinion confirms that the strong internal controls and sound financial systems which have been implemented are in-line with all applicable legislation and continue to bolster public confidence in the management of this entity”, added Rakharebe.

Durban’s municipal manager Sibusiso Sithole noted, “As an entity of the eThekwini Municipality, the Durban ICC has a responsibility to deliver on its twin mandates of generating positive socio-economic impact to the citizens of our City whilst simultaneously operating in a responsible and profitable manner. I am pleased that the entity has delivered admirably on both these objectives during the 2015 fiscal year.”

During the past financial year, the Durban ICC once again made an immense macroeconomic contribution to Durban, KwaZulu-Natal and South Africa. Despite the impressive contributions made in the previous financial year, the company achieved notable year-on-year increases in every major economic indicator for the 2015 year.
The company contributed R4.6-billion to the national Gross Domestic Product (GDP), showing a 47% growth in this figure from the previous fiscal year.

The vast majority of this contribution benefited the KwaZulu-Natal economy directly, by adding R4.5-billion to the province’s Gross Geographic Product (GGP) whilst creating and sustaining 10 874 direct and indirect jobs for the country.
This remarkable macro-economic contribution translated into further social benefits for the country by contributing R986-million to Indirect Household Income and generating R695-million in net foreign exchange earnings.

In addition to these achievements, the Centre also made impressive strides in other important areas of social responsibility and transformation. The company showed a significant improvement in its Broad-Based Black Economic Empowerment status during the year and demonstrated its ongoing commitment to skills development through its Student and Graduate Programmes.
Rakharebe went on to thank the Durban ICC shareholder, eThekwini Municipality, and the Board of Directors, led by Chairperson Ms. Mato Madlala, for their guidance and oversight over the past year. She also thanked the staff for their passion and commitment, and the clients, strategic partners and suppliers for their ongoing support.