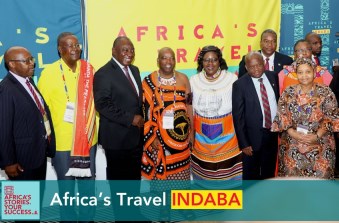 The three-day Africa’s Travel Indaba held at the Durban International Convention Centre (Durban ICC) was hailed as a resounding success by President Cyril Ramaphosa during the event’s closing ceremony on 4 May 2019.

This year’s event attracted tourism industries from 20 African countries who were doing business and 1663 international buyers from over 80 countries, with 342 first time buyers.

In a bid to reduce the red tape that travellers face when visiting the country, Ramaphosa announced that the South African government was in a process of overhauling its visa dispensation for the rest of the world and introducing a world class e-visa system.

“We must reduce the onerous and often unnecessary bureaucratic red tape that tourists who want to visit our countries face. This requires of us to streamline our tourist visa regimes. Tourism has an extensive value chain, stimulating economic activity in manufacturing, in the services sector and in the creative and cultural industries. As part of our efforts to revitalise our economy, South Africa is focusing our energies on labour-intensive sectors such as agriculture, the oceans economy and tourism. We have set ourselves a bold target to raise over $100 billion in new investment over five years. Tourism plays a critical role in that strategy”, said Ramaphosa.

Minister of Tourism Derek Hanekom said he was “blown away” by this year’s event, which has been dubbed as the biggest ever Africa’s Travel Indaba.

“It has been extremely busy, sellers selling, buyers buying and the media interviewing and reporting. We are a united industry, and an industry that unites, connects, builds bridges and overcomes barriers. We are an industry that is very resilient in the face of economic turbulence. We are an industry that is performing exceptionally well, contributing more than 9% to the GDP and employing 1.5 million people across the value chain in South Africa. Tourism grew by 7% in the continent as a whole,” said Hanekom.

“A total of 220 emerging and small businesses received various trainings including Tsogo Sun Book-a-Guesthouse training programme, Tour Operator Training, tourism establishment grading assistance. Over this period we have managed to engage with more than 3200 potential tourism business start-ups with the aim to encourage new entrants in the tourism sector. An impressive 40% of these businesses are youth owned and 45% women owned,” he said.

Durban ICC Chief Executive Officer Lindiwe Rakharebe said the Durban ICC was committed to the upskilling and empowerment of those in the tourism sector and as such 491 temporary staff members were employed by the Centre during Africa’s Travel Indaba. These temporary staff members include staff that were responsible for back of house, front of house, public catering as well as Trainee Chefs.

EThekwini Mayor Zandile Gumede said: “As a City, we are excited to have hosted a successful Africa Travel Indaba. We are very grateful to have met the needs of our delegates, and we are happy to report that our economic projections were reached. This has cemented our position as a mecca for tourism in the country. We vow to double our efforts to ensure that the next Indaba exceeds all expectations.”