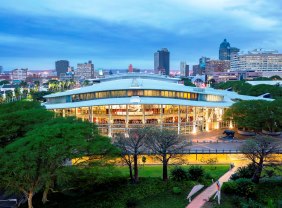 This was revealed by the Durban ICC, Chief Executive Officer Lindiwe Rakharebe, during the Stakeholder Engagement hosted by Durban ICC together with the Durban KwaZulu-Natal Convention Bureau on 4 October 2018.

Captains of industry and tourism experts shared insight on the importance of business tourism to grow the economy; as it contributes an astonishing R115 billion to the country’s gross domestic product annually.

Rakharebe said as a pioneer in attracting international events to the country, the centre’s mandate is to be a catalyst for economic development and job creation in the City and province as well as to elevate the profile of Durban as a preferred destination.

“We contributed R4.7 billion to the country’s Gross Domestic Product last year. The vast majority of this impact was felt in KwaZulu-Natal, where R4.6 billion was added to our Gross Geographic Product. The Durban ICC remains committed to broadening the economic impact of the events and tourism sector through contributing to inclusive economic growth. As such, over 9 000 jobs were created as a result of the Durban ICC’s activities over the past financial year,” she said.

MEC Zikalala called on stakeholders and citizens to do more to transform the tourism sector and said every corporate visitor who comes to the Durban ICC and many other venues in the province must experience the highest international standard and at competitive rates.

“The commercial value of visitors – whether they are travelling for business or leisure – must be at the heart of our economic development and employment creation trajectory. The severe levels of unemployment, poverty, and inequality require urgent attention and must preoccupy every South African of good conscience. Only when we are united, focused, and working together as patriots can we create jobs and lift millions of our citizens out of poverty,” he said.

“We need to encourage tourists to visit Durban and inform them that the City is not plagued by crime,” he said.

Galliver whose company has been conducting Durban ICC’s economic impact studies for the past four years said the cumulative direct expenditure as a result of events held at the Durban ICC from 2015 to 2018 is R9.08 billion.

Hufkie from the South African National Convention Bureau said annually the international business events industry supports on average some 252 000 direct and indirect job equivalents in South Africa, and contributes over R115 billion annually to the country’s GDP.
“We need to attract meetings and conferences that will have long lasting impact through ensuring that the events we attract drive economic growth and skills development in the country,” he said.

Freysen-Pretorius highlighted the importance of collaboration, authenticity and professionalism as a catalyst to securing business events.