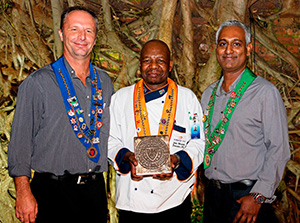 The Durban International Convention Centre’s Executive Chef, John Moatshe, was awarded the prestigious Chaîne des Rôtisseurs Brass Plaque/Blazon for his achievements in the culinary field. The accolade is presented to a chef who maintains a superb level of cuisine, hospitality and service, as required by the exacting standards of the association.

The Chaîne des Rôtisseurs is an international gastronomic society founded in Paris in 1248 and has more than 25,000 members in over 70 countries around the world. The association promotes the art of fine cuisine and supports the development of young culinary professionals.

“We are extremely proud of Chef John and the way he has distinguished himself by this outstanding culinary achievement”, commented Julie-May Ellingson, Chief Executive Officer of the Durban ICC. The sought-after brass plaque/Blazon is the highest accolade conferred by the Chaîne des Rôtisseurs committee and has only been awarded to a Chef in KwaZulu Natal on three other occasions. Ellingson, herself a member of the Chaîne des Rôtisseurs, added “This recognition is another milestone in the Centre’s proud culinary history and shows that we remain committed to maintaining our superb standards of cuisine and hospitality.”