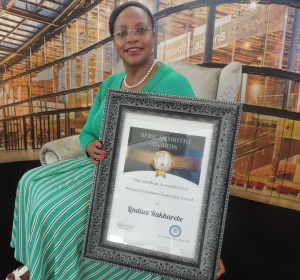 The prestigious event was held at the Durban ICC on 06 April 2019 and hosted by the National Funeral Practitioners Association of South Africa (Nafupa SA) in partnership with Zantsi Communication Solutions and Youth Economic Employment.

Urithi is a Swahili word meaning legacy. The purpose of the awards is to educate the African community and young people about the brilliance and achievements of fellow Africans.

Another key objective of the awards is to re-establish the culture of excellence among Africans and instil self- belief in Africans as well as contribute to the improvement of African oral history and across the African continent.

Nafupa President Muzi Hlengwa said Rakharebe was celebrated for her leadership and excellence not only as CEO of the Durban ICC, but for the various management positions she has held in all four of South Africa’s major banking institutions.

“These awards are aimed at honouring people who inspire others to achieve their full potential and are a beacon of hope in their communities. The recipients are Africans born in Africa because we want to acknowledge our African icons and have them celebrated throughout the world,” he said.

Hlengwa also said that the supreme purpose of the event is to motivate Africans in particular youth and women by shining a positive light on the lives of the Africans who have done exceptionally well.

Commenting on her award, Rakharebe said: “It is a great honour and privilege to be recognised in the Women in Business Leadership category. At the Durban ICC, we place huge emphasis on the promotion of leadership and entrepreneurship. The Durban ICC is the first purpose-built international convention centre in South Africa and has served as a catalyst for economic development in the City for the past 21 years by attracting a number of world-class international events to our shores and this brings real economic benefits to the African continent.”