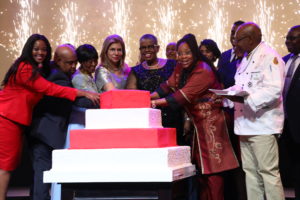 The Durban International Convention Centre (Durban ICC) celebrated its 21st anniversary in spectacular fashion and honoured stakeholders who have been instrumental in helping the Centre drive positive change in society and empower ordinary South Africans.

High-profile stakeholders including political dignitaries, clients, service providers, industry partners, celebrities and captains of industry were among the 500 guests that were acknowledged and celebrated at the prestigious gala ceremony on 27 October.

Lindiwe Rakharebe, Chief Executive Officer of Durban ICC, said one of the Durban ICC’s biggest feat is being a catalyst for economic growth, having contributed over R40 billion to the South African economy since opening its doors 21 years ago.

“The Centre has been a trailblazer and Africa’s leading Convention Centre for over two decades. This indeed, is a reputation the Durban ICC works hard to maintain through the commitment of its employees and support from stakeholders. By attracting a number of premier and world-class international events to our shores, the Durban ICC is a veritable engine room for the creation of jobs and has been responsible for creating and sustaining more than 100 000 jobs cumulatively over the past 11 years,” said Rakharebe.

The majority of the Durban ICC’s economic contribution has benefitted the people of Durban and KwaZulu-Natal. The Durban ICC story is one of foresight, vision, co-operation, determination, patience and ultimately outstanding success.
Opened by the first democratic President of South Africa Dr Nelson Mandela on 8 August 1997, the Centre was later named after Africa’s first Nobel Peace Prize Laureate, Inkosi Albert Luthuli.

Since then the Durban ICC has played a pioneering role in attracting international events to our shores and continues to transform people’s lives through prioritising the advancement of Small, Medium and Micro-sized Enterprises as a stimulus to achieving economic growth and development.

The Centre has lived true to the prophetic words of Dr Mandela when he said in his opening speech that in constructing the Centre, the people of Durban had shown “foresight, determination and initiative” in creating a venue “that all South African can be proud of”.

Dr Mandela said: “This occasion also highlights the impact this investment will have on the economies of Durban, KwaZulu-Natal and indeed South Africa. The impact will be felt in the province’s tourism industry and further afield as delegates and their families take the opportunity to visit our country’s attractions. As a meeting venue of world standards, the centre will most certainly attract conventions from around the world. In particular, it can help us attract our share of the multilateral conferences that are held in Africa each year.”

EThekwini Municipality Mayor Zandile Gumede acknowledged the board members whose unwavering commitment and efforts contributed to the financial turnaround of the Durban ICC, namely Mato Madlala, Bulelwa Ndamase, Themba Ngcobo, John van Rooyen, Ashok Sewnarain, the late Mvuseni Ngubane and Linda Pampallis.
“The theme ‘21 Years of Changing Lives’ is rather fitting for today’s celebrations for a convention centre that has continuously reinforced its credentials in the 21 years of existence. The centre has remained relevant by ensuring it evolves with the changing times to accommodate the needs of discerning customers,” she said.

Mayor Gumede also congratulated the Durban ICC for its achievements over the years which include receiving top honours at the World Travel Awards earlier this month after being declared Africa’s Leading Meetings and Conference Centre for the 17th time in 18 years. The Centre also emerged as one of the Top 17 client-rated Convention Centres in the World at the AIPC Apex Awards.

“The self-sustaining entity of the eThekwini Municipality which thrives on maintaining world-class standards reinvests profits into the Durban ICC to ensure it continues to remain the venue of choice for local and international visitors. Testimony to the sustainability of the Durban ICC is the R40 billion it has generated for the national economy after being built at a cost of R746 million; and it has remained operationally profitable for the past eight years,” added Mayor Gumede.