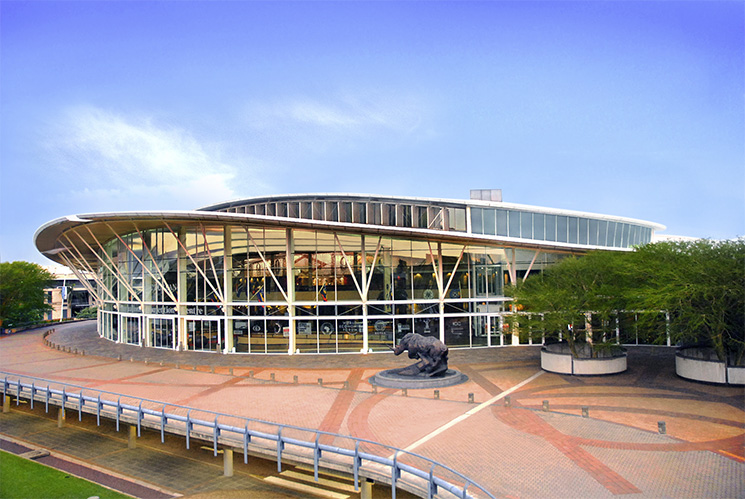 After the stellar results delivered in 2012, the Durban International Convention Centre has continued to sparkle with yet another year of impressive financial performance. The Durban ICC produced an outstanding revenue figure of R157-million and profits before tax of R45-million, once again making it the best performing convention centre in the country. The company also contained expenditure to 15% below budget resulting in a R13-million saving, despite rising strong inflationary pressure.
Commenting on the results, Durban ICC Chairperson, Mato Madlala, noted “My congratulations must be expressed to the management and team of the Durban ICC, under the leadership of the CEO, Ms Julie-May Ellingson, for achieving such a strong set of financial results. Despite tough competition, the Durban ICC has maintained its position at the front and once again our ICC Team, stakeholders and most importantly, our clients, have ensured that the Durban ICC remains the best convention centre in Africa.”

“The Durban ICC is proud of its strong financial performance over the past fiscal year. Despite the challenging economic environment, the company has worked hard to secure good quality events this year as well as sustainable business for the years ahead. These solid results were attained by achieving above-target revenues and effectively controlling costs at all levels of the company. Remarkably, this was achieved without compromising on our top priority, namely our clients’ experience. This is demonstrated through the overall client satisfaction rating of 88% and the Durban ICC being voted “Africa’s Leading Meetings and Conference Venue” for the 12th time by the World Travel Awards”, commented Ellingson.
Built to serve as a catalyst for economic prosperity, the Durban ICC once again delivered major economic benefits to the city, province and country this year. The past 12 months saw the Durban ICC contribute R2.94-billion to the national GDP, with the bulk of this benefiting the KwaZulu-Natal economy directly by adding R2.73-billion to the province’s annual GGP.

This remarkable economic impact translated into further social benefits by creating and sustaining just under 8,000 jobs over the past year and generating R1.49-billion in indirect household income as a result of the Durban ICC’s activities.

The Centre generated over 1.25-million delegate and visitor days in Durban, 36% of which were generated by international visitors. This in turn added R566-million to South Africa’s net foreign exchange earnings and R268-million in tax revenue.

In addition to the impact made to macro-economic landscape, the Durban ICC continued its commitment to staff training and skills development closer to home. The past year saw the company launch a new Graduate Programme which affords young professionals an opportunity to gain valuable work experience and jumpstart their careers. Additionally, in partnership with the Durban University of Technology, the Centre also restructured its Student Programme to accommodate more interns in its experiential learning curriculum. These programmes contribute directly to the skills development mandate of the country’s tourism industry.

The Centre once again invested heavily in the training and development of its staff with 300 training days completed, exceeding the target of 150 days by 100%. The sharing of knowledge and expertise was also supported via international exchange programmes and staff attendance at key industry conferences.

Finally, the Durban ICC will continue to host high profile events that showcase Durban, KwaZulu-Natal and South Africa in the years to come. These events include the Congress of the International Union of Architects in 2014 and the world’s largest aviation exhibition, the World Routes Development Forum in 2015. These, along with the myriad of other events, will continue to bring social and economic benefits to the people of Durban and KwaZulu-Natal. 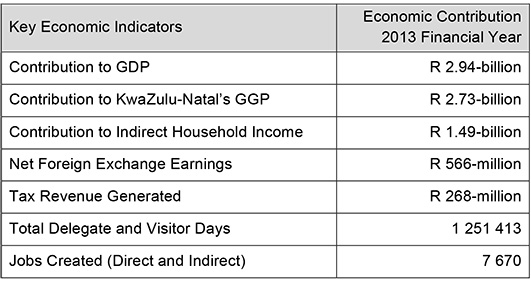