Gwyn Heaton inducted into the SAACI Associations Hall of Honour 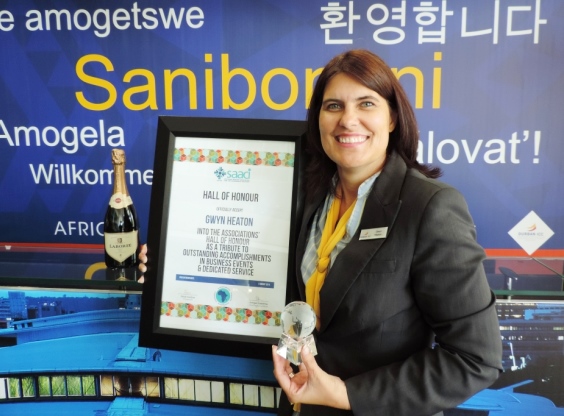 The Durban International Convention Centre takes great pleasure in congratulating Gwyn Heaton on being inducted into the SAACI Association’s Hall of Honour as a tribute to her outstanding accomplishments in the business events industry and for her dedicated service to SAACI over the years.  Gwyn was awarded this honour at the 2015 SAACI Congress held in Cape Town at the beginning of August.

Gwyn has been involved with SAACI since 2004 and was one of the founders of the SAACI KZN Bursary Programme which she managed until 2010. During her tenure she was elected as the Secretariat, PCO Representative and then served as the KZN SAACI Chair for a period of 2 years. She has continued to support the association in encouraging membership growth and raising awareness of the benefits which SAACI holds for new and established business tourism companies.

Gwyn is currently the Events Project Manager at the Durban ICC and oversees the Events team that co-ordinates various exhibitions, private and special events and international congresses. She was also recognised as SAACI Member of the Month in May this year.

Congratulations on your fantastic achievements, Gwyn and keep up the great work!